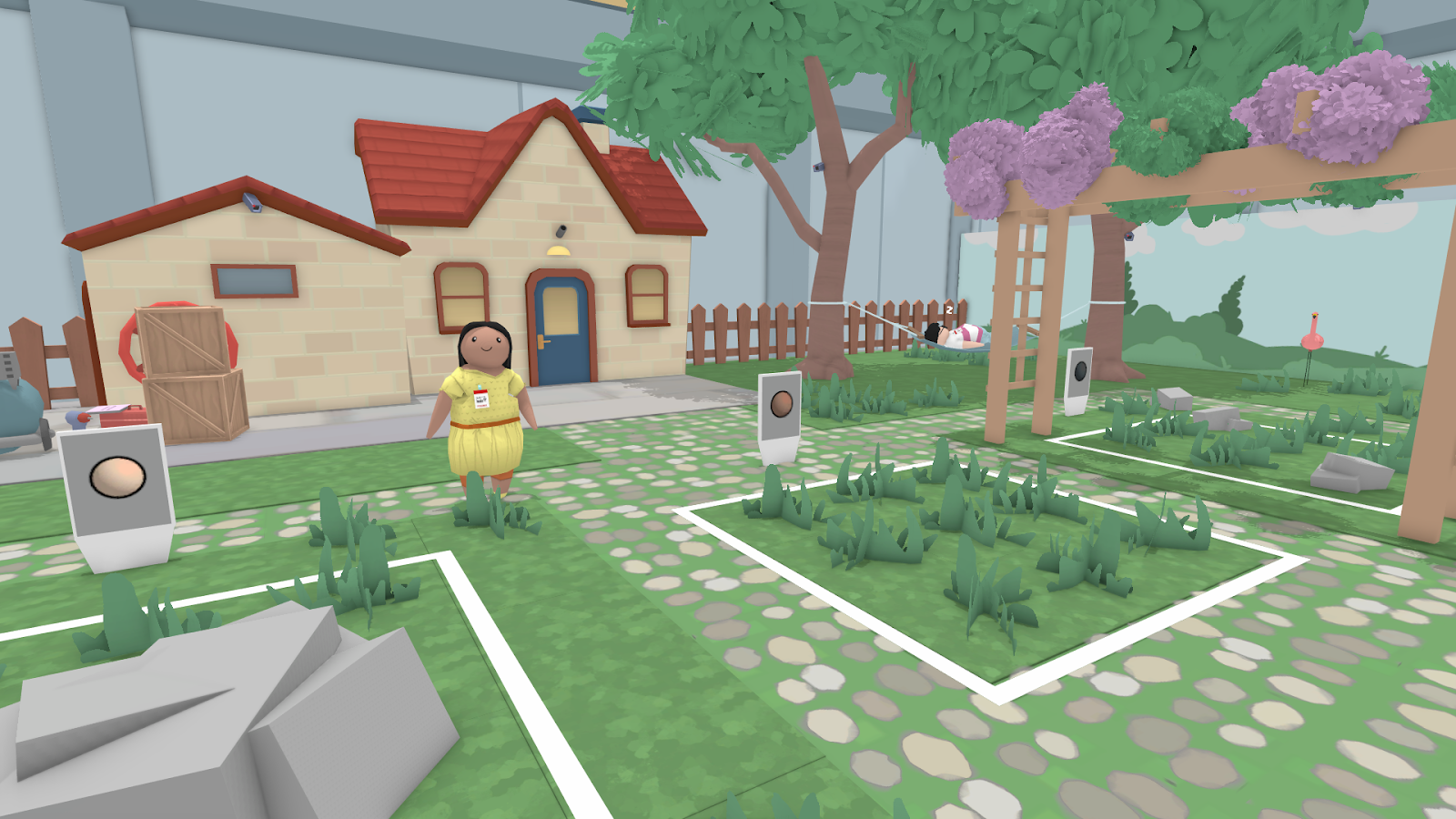 Hello humans – RoboCo dev team checking in! Among other exciting behind the scenes developments (more on those soon 👀), we’re happy to share that we’re currently in the process of revamping a couple of our challenge levels you might remember from last year’s closed alpha – namely, our Careful Lawn Care and Freights in High Places challenges!

In our ongoing quest to make awesome challenges, we gather feedback from the community and internal playtesting, and we interpret the feedback based on principles that we’ve developed along the way to describe what we think makes an ideal RoboCo challenge. Sometimes the changes this leads to are small refinements, and sometimes we feel that a challenge can best meet our team’s ambitions via bigger changes to the objectives and layout. We chose these two challenges as examples of some of the bigger changes underway!

We want to save most of the specifics for launch when you all have a chance to play, but here’s an early preview of the direction we’re headed:

As we detailed in last month’s challenge-focused episode of Inside RoboCo, one of our most critical principles is to inspire players to design and construct novel robots for each challenge. We take into account if the challenge is meant to be easier or harder in our difficulty progression, but each challenge should push the player in a new way. To achieve this, we look for the right challenge constraints to prevent the player from too easily re-using a robot that they’ve built for a previous challenge. If the player builds on top of things they made in the past, that’s great, but we always want each challenge to require enough innovative functionality to give it a sparkling fresh feeling.

Despite our best efforts to distinguish them, our Careful Lawn Care challenge, which involved mowing a lawn, and our Tippy Toe Tidy Up challenge, which involved dusting a room, were tending to lead to overly similar robots, but with a different end effector — that is, a different mechanism for interacting with the environment. It wasn’t the fault of either challenge on its own, only an issue that cropped up in combination.

We brainstormed ways we could make one or the other challenge more distinct in its requirements, while preserving the environmental art as best we could. We landed on the idea of reimagining Careful Lawn Care from a mowing challenge into a gardening challenge. As we prototyped it, we found gardening was a great fit for the kind of engineering tasks that work best in RoboCo, so we moved forward with the gardening version. That being said, if you played and enjoyed Careful Lawn Care during Closed Alpha, don’t worry, we carried over several of our favorite things about the earlier version!

We don’t have a new title yet for our gardening challenge. Given the changes, it won’t be Careful Lawn Care, but we will be sure to give the same playful feeling as our other titles. If you have ideas for fun names for a gardening challenge based on the relatively little we’ve revealed about it so far, feel free to suggest them in our Discord!

As with our newly revamped gardening challenge, we’re saving most of the details for launch – but here’s a first look at what we’re up to:

We wanted to create a busier warehouse floor and make the challenge itself more inspired by warehouse robots. As you can see we’re experimenting with elements that add extra dynamics, like a conveyor belt and an NPC robot going about its own tasks.

As with any challenge, these revamped challenges will both need continued testing and iteration, another art pass since they now have several placeholder elements again, plus polish and bug fixing, but so far we’re quite pleased with the new direction they’re headed in.

That’s all for now – but stay tuned for more updates from our team! As a quick heads up, we’re pausing our Inside RoboCo video series this month to focus our video efforts on creating new gameplay trailers for upcoming summer indie gaming events – but rest assured, we’ll be back with an all-new episode in May! Until then, be sure to follow us on Twitter for more behind-the-scenes content, join our growing Discord community, and add RoboCo to your Steam wishlist. Later, humans!