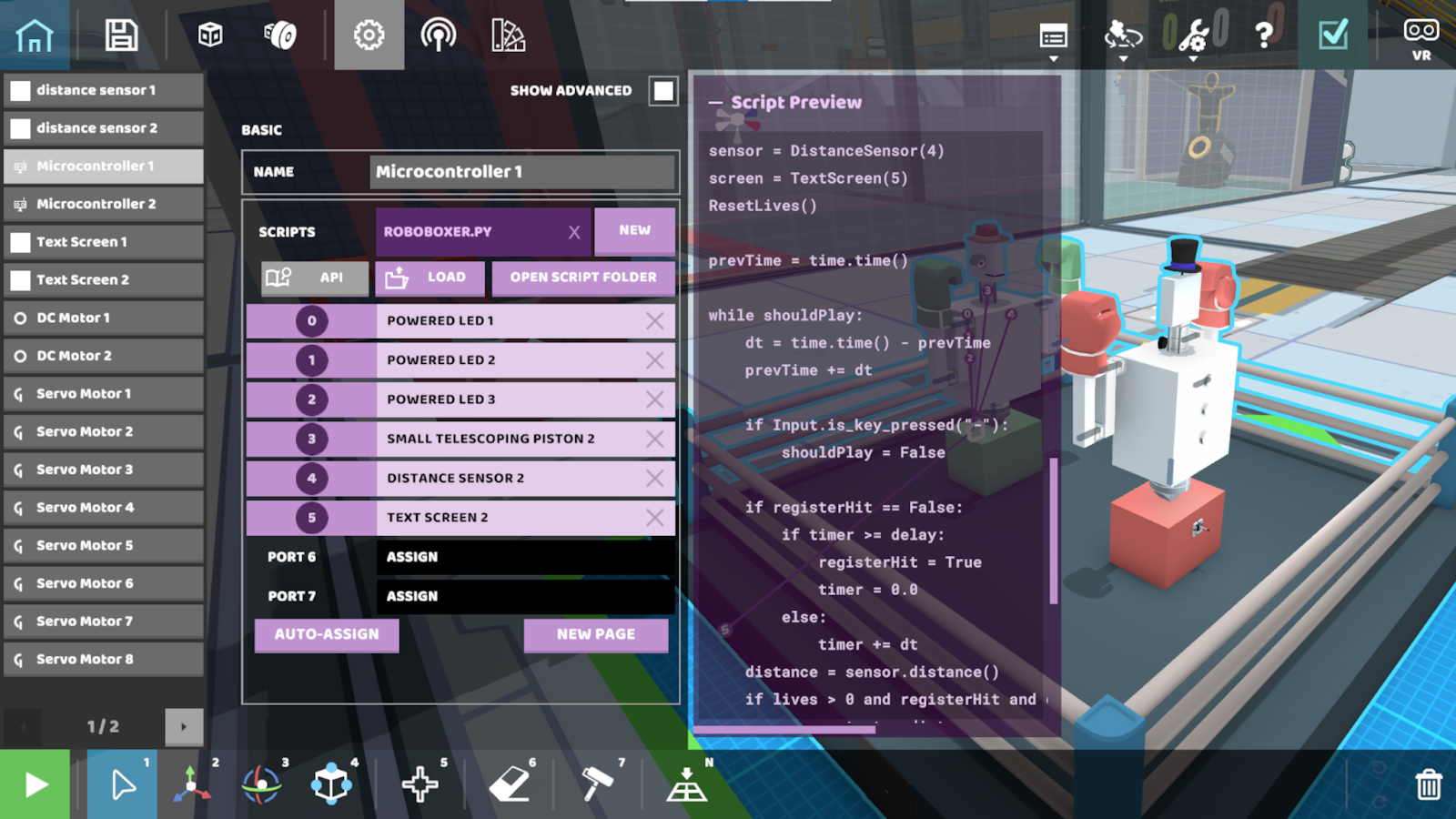 Last week, we announced robot programming was coming to RoboCo and why we thought it was so cool. However, we didn’t reveal what programming language we decided to go with.

As you may have gathered from the title, Python is our language of choice. However, it wasn’t an easy decision. Today, we’re exploring what exactly went into that decision, including why why we decided to go with written code and why we went with Python over other popular languages like Java and C++.

As we began design on robot programming, we considered several options for how it could be done. We ultimately decided to start with support for written programming in the Python language. We hope to later extend this with an external Blockly helper tool that will provide a visual programming alternative.

But let’s take a step back and see how we came to that conclusion. There are valid reasons why a game might use any of the options we considered below. In RoboCo’s case, we aim to support both general gaming audiences and education-centric audiences like FIRST robotics teams, and we want to have a strong launch on Steam Early Access. Therefore, we evaluated our options by looking for the best overlap between those two audiences, by considering the user experience, and by aiming for the smartest use of development time.

How It Works: Place nodes (the rectangular cards in the picture) and connect them with lines that define their inputs and outputs. The flow from node to node describes the robot’s behavior.

Why We Considered It:

Why We Didn’t Choose It:

How It Works: Place physical blocks that serve as units of simple code: a timer that counts down, a button that sends a signal when pressed, a logic gate that only lights up when a condition is met. Connect the output of one block to the input of another block to form a series of instructions. Technically, this is still a form of node-based programming like above, but now the nodes occupy physical space in the game world.

Why We Considered It:

Why We Didn’t Choose It:

How It Works: Snap together word blocks to form instructions that are very similar to written code.

Why We Want to Support This:

How We Want To Support This In the Future:

How It Works: You read at least a little bit of the documentation (boo!) and then you start writing out cool things for your robot to do (yay!)

Why We Decided To Start With This:

Why Did We Choose Python?

Ok, so that covers why we chose written code as the foundation of robot programming in RoboCo. Some of our coding enthusiasts may be curious how we settled on Python as our language of choice.

First of all, we knew that using an interpreted language inside RoboCo would be much more practical for technical reasons. This immediately took compiled languages like Java or C++ off the table. Interpreted languages also allow for a faster iteration speed for players writing and testing their code.

Third, we wanted something relatively easy to use. Python aims to be readable, avoid complex syntax, and use straightforward English to the extent that it can. It is often recommended as a good language for beginners.

Fourth, we wanted something that made sense for robotics teams and educators. Probably because of the combination of our second and third points, Python is a coding language commonly taught in schools, is part of the Project Lead the Way curriculum, and is supported by educational resources like CoderZ or CodeCombat.

Finally, while any and all coding experience is valuable, and underlying concepts are more important than the language itself, it doesn’t hurt that Python in particular is highly in-demand for jobs, making it quite relevant for students outside of RoboCo. Knowing Python could lead to a career in various fields, including software engineering, data analysis, product management, machine learning, or mechanical engineering. Combined with our company mission of “creating playful experiences that improve people’s lives,” these reasons made Python the perfect choice for RoboCo.

Bringing Your Robot Commands Into RoboCo!

But how exactly does all this work? How do we get our code from Python into RoboCo? Well, that’s a great question and one that we’ll save for next week’s blog, where we’ll showcase step-by-step how best to write your code, upload it, and get your robots running all by themselves!