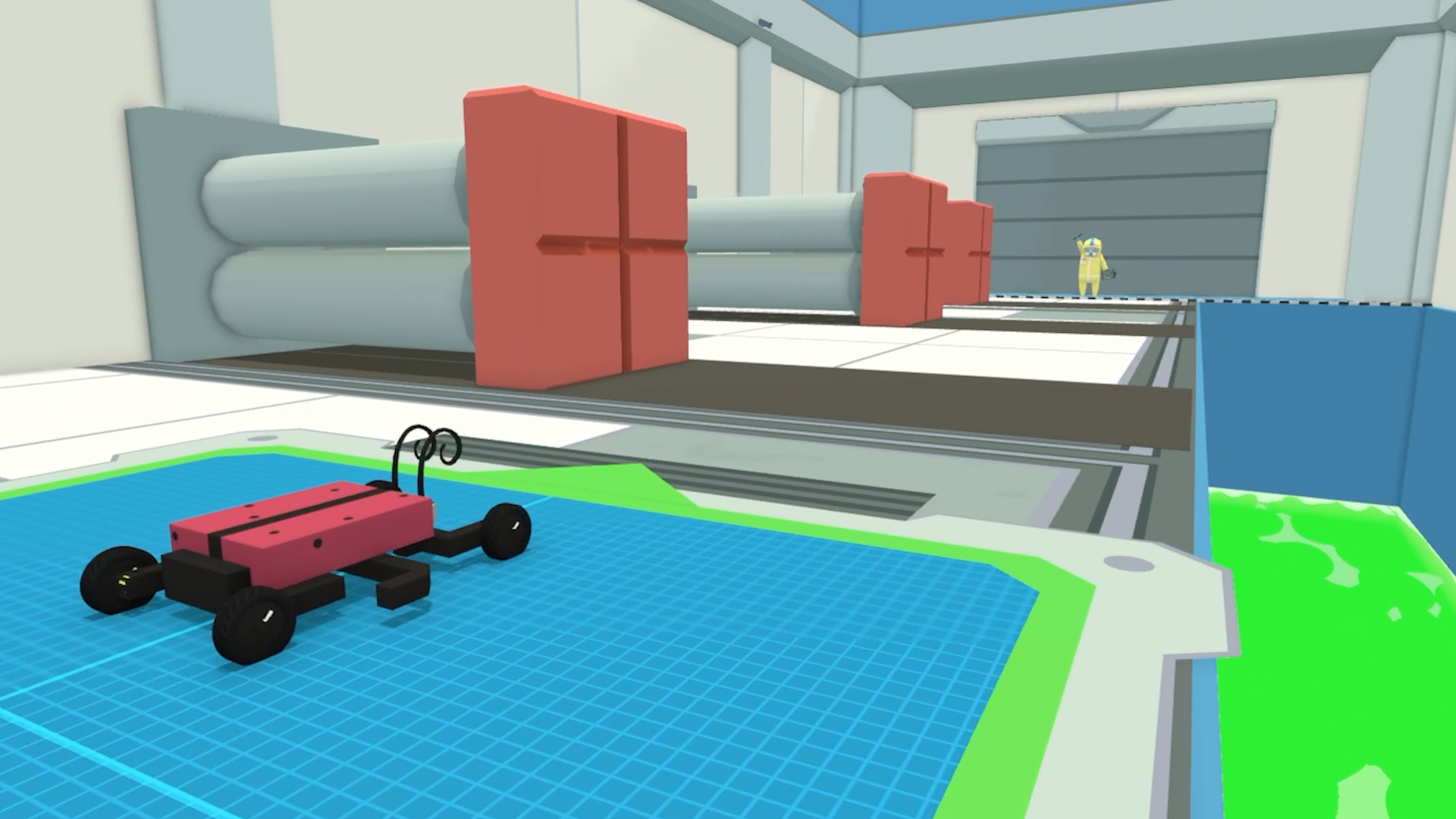 Last week, we traveled back to the Jurassic period and showcased some fearsome dinobots! This week, we’re talking about a new campaign element to help teach the ins and outs of RoboCo – RoboRepair Tutorials!

These are meant to work together with several of the other tutorial and discoverability strategies that we covered in a previous blog. We described each of those strategies in terms of their goal, so let’s do the same thing here.

Goal: Help players learn how to fix common robot-building issues and how to use features not covered in the introductory tutorial

Basically, we knew that beginning players might often run into similar robot-building issues, like having too much weight at the top of their robot that causes it to tip over.

We also knew that some features, like our joint editing system, were too advanced to cover in our introductory tutorial, and needed a different place to be taught.

Hopefully several of you got to check the RoboRepairs out during the recent Steam Next demo. For those who didn’t, here’s a description of how they work.

You will find the RoboRepair tutorials in small sub-menus embedded at various points in the campaign. You don’t have to play the tutorials, but if you do, each is worth 1 bit. These bits add to the bits you are earning from the main challenges. Once you have enough bits, you can unlock new challenges, new parts, and perhaps a new group of RoboRepair tutorials.

Each RoboRepair tutorial consists of a topic like “Flip Motor Direction.” When you load a RoboRepair tutorial, you will arrive in a small scene with a robot already built for you. The robot is meant to carry out a simple task, like driving straight ahead through a goal line. You will be guided through one or two steps to test out the robot. Inevitably it will turn out that something about the robot isn’t set up correctly. For example, the robot spins in a circle instead of driving straight.

Now you know why this robot was sent to the RoboRepair division for diagnosis and repair! You will then be given access to a very limited set of tools to fix the problem — for example, you can only edit motor properties. (No adding or deleting parts, no moving or resizing, nothing else except a Select tool, some motors to click on, and their resulting properties panel.)

You can make changes and see what happens until you find the right fix and complete the task. In our example, that would mean this:

In other words, RoboRepairs are simple puzzles that give you such a limited set of tools that you pretty much have to stumble across the solution.

RoboRepairs seem like an interesting way to teach! How did they come about?

RoboRepairs were inspired by our struggle to turn our main campaign challenges into a traditionally scaffolded tutorial. In several games I’ve worked on in the past, I’d aim for what I might call a Plants vs. Zombies style tutorial, where there’s a linear sequence of levels, and each level teaches a new concept. The concept could be a game rule, an interesting consequence when multiple rules are combined, or a new mechanic. Other good examples of this style of tutorial include Portal or Trainyard. Games with this approach are often praised for making the game into one giant tutorial that doesn’t feel like a tutorial and instead just feels like you’re playing the game.

In the early stages of developing our campaign, we brought elements of that approach into RoboCo that remain to this day — for example, we ordered our challenges into ascending complexity, and we decided to unlock new robot parts as the campaign progressed. But since each challenge requires such distinct robot functionality, our game turned out to be more of a variety pack than some other games might be. In RoboCo, you couldn’t incrementally improve on the same starting robot the way that you might in Besiege where all the levels in a campaign involve some form of destruction.

Another problem was that RoboCo has pretty much all of its robot building functionality available at the start. Typically when a game delays a tutorial, it’s because the feature that tutorial covers can be locked until later, like new plants in PvZ. We could do that with robot parts, but we didn’t want to withhold robot building functionality beyond the initial tutorial. It sounded too frustrating: “Well, finally when I get to Challenge #4, I’ll be allowed to edit joints!” Especially since you could find yourself in a situation during Challenge #2 where the default joint type wasn’t right for what you were building, but now there would be no way to edit it.

Therefore, RoboCo challenged us to think outside the box. We designed and prototyped several ideas, and ultimately settled on RoboRepairs as a new challenge type with which we could add engaging on-demand learning opportunities.

While RoboCo was being developed, a video from Game Maker’s Toolkit came out that succinctly put to words the nature of the problem we had been facing. As a robot building sandbox game, RoboCo shares a lot in common with the other “complex games” mentioned in the video.

Ok, so if these RoboRepairs are intended as tutorials, why not guide the player through the exact steps of the fix?

Well, first off, we should say that we do feel that guided tutorials like the introductory tutorial in our Sandwich Server challenge (showcased below) have their place. We know that beginning players do actually need the basics demonstrated for them before they can be expected to start trying more exploratory forms of learning.

But players won’t think as deeply or retain info as well when they don’t experience enough surprises or friction during an activity — for example, if they are just following guided instructions in a video game and therefore everything goes according to plan. (If you’re curious why this is, I suggest this delightful video on The Science of Thinking.)

We can get away with this guided approach in our introductory tutorial, because many of the actions covered in that tutorial are such core robot building functions that we expect that players will quickly repeat them after the tutorial ends, which gives the reinforcement we want.

But as players grow increasingly comfortable with the most basic actions in RoboCo — like rotating the camera, attaching constructs, driving their robot, etc. — we know they will appreciate the game starting to take a lighter touch with its later tutorials, giving them more agency to experiment and figure things out on their own. That’s where the simple puzzles and limited tools of the RoboRepairs come in. We make the puzzle just open enough to create opportunities for mild moments of friction, but never so much friction that players should really get stuck.

If RoboRepairs are simple puzzles, isn’t the title a big spoiler? Like in a RoboRepair called “Servo Motors,” I can tell the robot’s problem will involve the servo motors….

Exactly! We’re not aiming for challenging puzzles of the sort you’d find in a puzzle game. Even something as simple as, “which of these servo motor properties will do what I want?” is enough mental friction to get your brain engaged. If the title of the RoboRepair is a major hint as to what you’re trying to do, that’s a positive thing, given that our goal is mild friction only. Then you just have to figure out how to carry out the repair. This is meant to be a super quick tutorial after all!

We thought about giving each RoboRepair tutorial a whimsical name like “Once! With Feeling” that would be purely for flavor and vague about the repair. But we decided it was more important that players be able to browse the list of RoboRepairs, see a topic they might want to learn about (like “Servo Motors” or “Rotational Joints”) and jump directly into the tutorial of interest.

Why make the RoboRepairs optional instead of required? Why let you select them in a flexible order?

Basically, learning how to build robots in RoboCo is so nonlinear that we can’t always predict what players will want to know, or the order in which they will want to know those things. This goes back to that video about “complex games.”

Thinking about how to tutorialize RoboCo over the years has given me a new appreciation for fighting game tutorials — you know, the “Lesson Mode” that walks you through every mechanic like “Walking,” “Jumping,” or “Medium Attack.” These are not one of my preferred forms of tutorial, as they’re rote and not really even intended to be fun. But one thing they do quite well is they let you access any lesson from the menu, so you can skip the things you know and get on-demand help for the specific thing you are curious about.

We figured we could mimic aspects of that flexible, on-demand access of fighting game tutorials, but improve upon the model with our RoboRepairs in two ways:

Firstly, no one gets excited to open up a “Lesson Mode.” Instead, in RoboCo, we placed our RoboRepairs in multiple sub-menus within the campaign itself to make them optional parts of the full campaign. You could almost think of them as side quests that become available in small batches during the campaign

Secondly, to avoid the rote quality of fighting game tutorials, we made our RoboRepairs more puzzle-like for the reasons we described above.

These RoboRepairs sound pretty helpful! Are there plans for more tutorials to showcase other gameplay aspects like coding or other complex mechanisms?

We’re adding a couple more tutorials before Early Access. We’d love to add even more post-launch depending on what features players would benefit from most.

As for their contents, we’re currently aiming to teach intermediate features that weren’t adequately covered by our other strategies, rather than advanced features. Teaching how to code would be quite involved and probably deserves a whole automation campaign of its own, so we don’t expect to be attempting that any time soon, but maybe someday! We do have a RoboRepair tutorial under development that will teach how to assign controllables (like sensors) to ports on the microcontroller, so that they can be referenced via Python script. This is more about teaching the user interface than coding as such.

We appreciated the constructive criticism and suggestions from players who played through the RoboRepairs Tutorials during our Steam Next demo, and we will do our best to keep those suggestions in mind as we finish up our RoboRepair Tutorials and develop new ones. In fact, chances are good that you’ll see updates regarding our progress on the Tutorials in future devblogs!

And that’s it for this week’s devblog! Have the RoboRepair tutorials been helping you? What other aspects of the game would you like to see tutorials about? Let us know in our Official RoboCo Discord! Next week, we’re talking about all the new artwork and assets we created to transform Chrome Thumb into a gardener’s paradise!