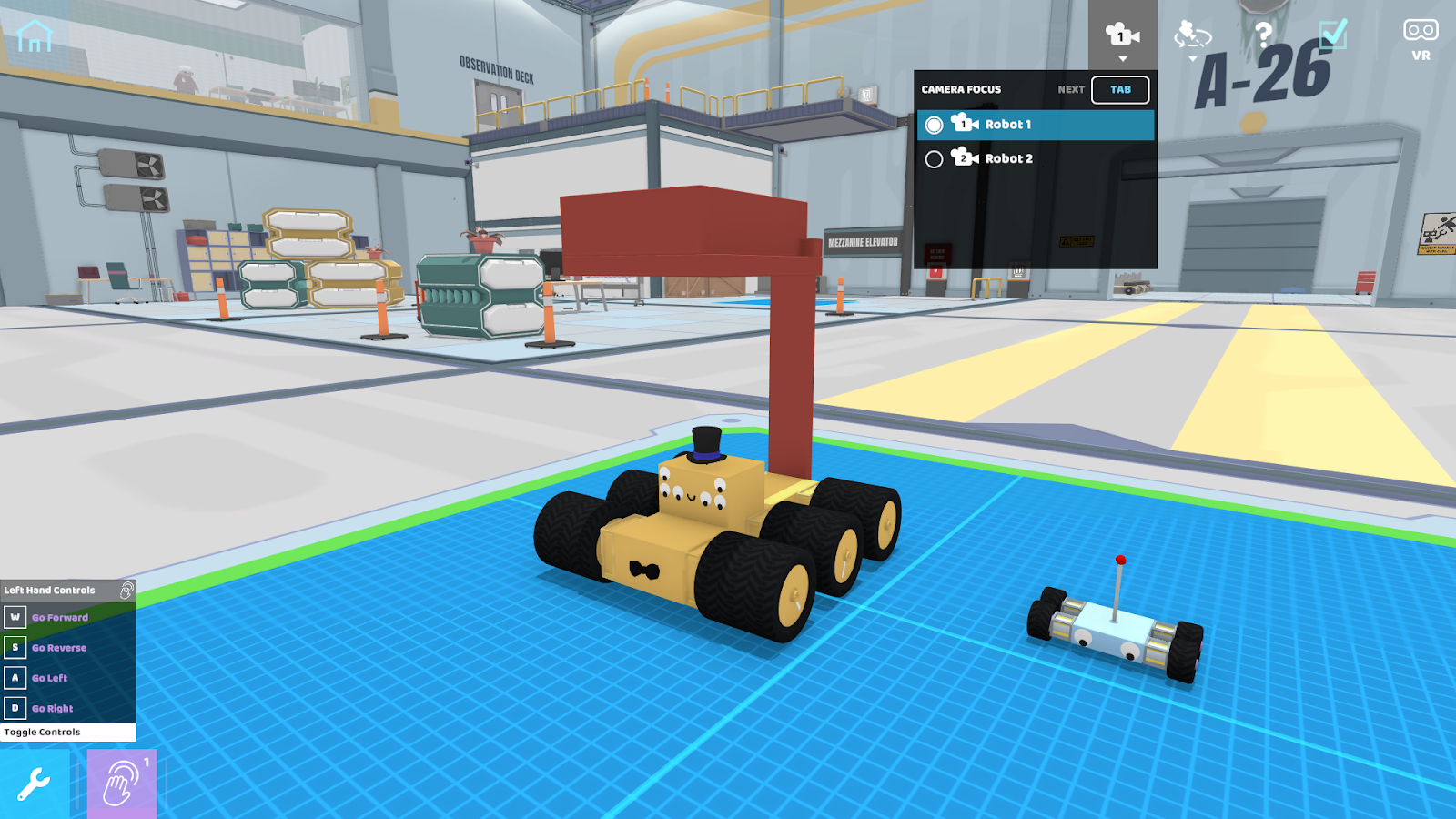 Take a Seat in the Director’s Chair!

Currently, there are three camera options in RoboCo: tethered follow, follow, and free look. Speaking of the free look camera, we had a couple of players during the demo ask if there was a way to move it around, and there is! To move the free look camera around the environment, hold the right mouse button and use WASD to place it somewhere new. Once you’ve positioned it correctly, let go of the right mouse button so you can drive your robot again. We’ve updated the hover tooltip to be clearer about this.

But enough about the free look camera, let’s talk about the new camera selector. To use it, first make sure your camera is in either tethered follow or follow mode. Once that’s done, a new camera focus selector UI will appear in the upper-right corner of the HUD.

You can then choose which robot you would like the camera to follow. Currently, the selector defaults to the largest robot, but you can select a different robot to follow via the HUD. You can also cycle through different robots by hitting Tab on your keyboard (or a remapped key of your choice).

The reasoning behind this addition was simple. Unlike Besiege and other similar games, RoboCo doesn’t have a starting block that limits players to building one mechanism at a time. As a result, we’ve seen players add unattached blocks or constructs to a build zone, which our game would then read as a separate robot. This meant that when the player entered Live mode, the camera would try to find a balance between the two parts, leading to confusing camera behavior like the one showcased below.

This is why the new camera selector defaults to the largest robot. You can also cycle to a different camera to track down the unattached parts. It also allows for a new scenario in which a player can easily have more than one robot on the screen, leading to more ambitious builds and designs!

Turn Your Vacuum Into a Leaf Blower!

In addition to the new camera selector, our team has also been finalizing some updates to our vacuum part. First, our WIP vacuum up until now just drew objects closer to it, but now it actually vacuums up small objects into a receptacle. We wanted to make sure that you wouldn’t lose important objects, so we also added the ability to reverse the air flow direction so that the vacuum will expel or blow away objects.

To switch between the different airflows, you can either flip the airflow direction in the vacuum’s Properties Menu or map the action to a key in the Controls Menu. We’ve also added the action to our custom API so you can use it for programming!

Other Things We’re Working On

As we approach Q4 2022, our team wanted to make a habit of including a list of ongoing development projects that may interest players! Some of the things we’re working on include:

Cleaning up defects and usability issues in challenges

Hooking up sound effects and a little bit more music

A new robot building feature that will be revealed in a future blog!

And that’s it for this week’s devblog! Are you excited about the new camera and vacuum updates? Let us know in the Official RoboCo Discord or on social media! Next week, we’re unveiling some new RoboRepair Tutorials we’ve been working on that didn’t make it into the Steam Next Demo!